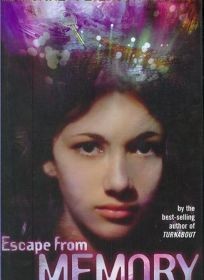 While playing with hypnotism at a slumber party, Kira has a vision of herself fleeing from a war-torn country with her mother and speaking a language she can’t identify. She tries mercilessly to glean information about these memories from her mother but fails to obtain any answers that satisfy her. Just days later her mother suddenly disappears and a woman who claims to be her Aunt Memory tells Kira that her mother is in grave danger. She takes her to Crythe, a country that does not actually exist, to save her mother, at least that is what she tells Kira. Kira quickly finds out that Memory is not what she seems and that she and her mom are in extreme danger. She has memories locked in her head that could very well cause her death, but they are also the only thing that might save them. Margaret Peterson-Haddix really knocked one out of the park with this fun-filled mystery adventure

Kira is forced to grow up much too fast in order to survive the harsh environment of Crythe and she is required to make choices that no teenager her age should ever have to make. Rona, the woman who claims to be Kira’s Aunt Memory, is actually looking to profit off of her parents’ inventions.

Rona demands that Kira give a speech that Rona herself wrote, but upon reading it Kira realizes she is being used as a puppet to fulfill Rona’s evil schemes. Kira and her best friend Lynn are able to communicate secretly and talk about what it going on.  This angers Rona and as a result, she locks Kira up in a cell with her mother, giving them the chance to share their information with each other and learn the truth. Kira learns of the importance of memory in Crythe and why it came to be. Crythe was originally located in Ukraine, with few natives such as Kira’s parents. They were illegally educated in Russia and eventually the Soviet Union found the community.

I loved this book and I would recommend it to anyone who loves an action-mystery book. I decided to read this because in earlier years I read the prequel, Among the Hidden, to this book and I loved it, so I thought that I should give this one a shot as well. I loved the writing style of Margaret Peterson-Haddix because I have never seen a writing style like this one in any other book series. I like how she does not make everything as clear as the reader expected helping the reader solve the mystery and pulling them even more into the story. Throughout the book I was wondering if my predictions were correct. The author´s unique style made me feel like I was in the book solving the mystery with them.