Nothing is as it seems in the small, impeccable town of Rosewood.  For underneath Rosewood’s perfection sits unbelievably dirty secrets and lies.

Perfect by Sara Shepard is a story about four teenage girls who have a mystery to solve.  “A,” as the bad guy calls himself or herself, is threatening the girls with all “their dirty little secrets” and ruining their lives.  These four girls (Aria, Spencer, Emily, and Hanna) have lately been getting threatening text messages, emails, and notes from A.  These messages imply the writer has total knowledge of information which the girls had believed were well-kept secrets.  These secrets go as far back as seventh grade and as recently as just a few seconds ago.  While dealing with this stress, the girls are also trying to figure out who killed their seventh grade best friend Ali.  Ali was wildly popular and beautiful; when Ali’s body is found in a hole years after her disappearance, the girls become worried that one of them could be next.  “I’m standing here, looking at your grave, and it still isn’t real.  I hate that we don’t know what happened.  Is the killer still here? Is A telling the truth?”

I greatly enjoyed reading Perfect, from Sara Shepard’s Pretty Little Liars series.  I really liked that Sara Shepard wrote the book so that each of the four main characters take turns narrating chapters.  Each time a character was done narrating a chapter, I had to resist the temptation to skip to the next chapter she narrated.   Sara Shepard managed to dangle the truth about who A was above readers’ heads throughout the whole book and kept me wanting to read more and more.  Perfect was an amazing, exciting book that I would reccomend to any girl out there who likes drama, mystery, and romance. 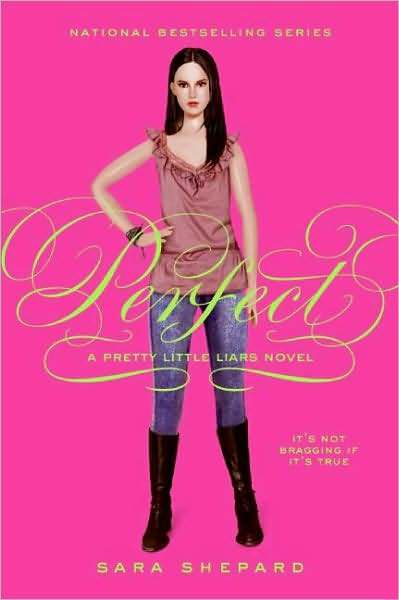