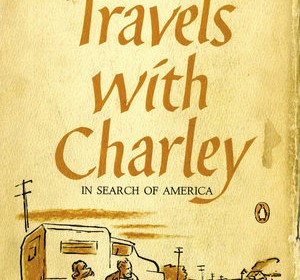 In 1960 John Steinbeck buys a custom made pickup truck and prepares his poodle Charley to go on an adventure. Traveling America from the tip of Maine to San Francisco, he  rediscovers the country he has been writing about for years. Rocinante is his beloved truck and Charley is his cherished French poodle. Charley, his poodle, is a very social dog and can annoy Steinbeck at times. He is a very calm poodle who likes to play with other dogs. However when he gets the chance he acts particularly aggressive near bears. Rocinante is an undoubtedly reliable truck without an ounce of plastic and in Steinbeck’s words is “Built to last, unlike the modern SUVs that are built so cheaply that they need to be repaired every six months or so.” Finally there is Steinbeck himself, a smart man who is eager to smell the countrysides of America, see the sights, and meet true Americans again at the age of 56.

He dines with truckers, other families, friends, and offers anyone who walks by his truck a cup of coffee and some rum. Traveling all over the map with his poodle he rarely ever sleeps in his well equipped truck, which is nicer than most of the places he stays. He meets many interesting people during his journey like actors, farmers, old friends and many more.  During this trip he has some trouble with a few people like Canadian border patrol and alcoholic veterinarians. He reflects on this all and comes up with the most complex and crazy ideas while he is driving. He often becomes very lonely and misses his wife who is back in New York eagerly awaiting his return from this almost three month long adventure. In this book Steinbeck describes America in his own words and the people who call it home. It reflects on the American character and in his words “How he finds certain types of loneliness in people everywhere he goes and in everyone he meets.” He discovers things he never would have learned about his poodle, Charley, and completes his task of rediscovering America. This is an excellent novel by an extraordinary thinker and writer. I think this book would be a long but good read for tennagers because it describes the dcoutrysides that we seem to neglect these days. I will leave you with one of Steinbeck’s quotes, “A journey is a person in itself; no two are alike. And all plans, safeguards, policing, and coercion are fruitless. We find that after years of struggle that we do not take a trip, a trip takes us.”