The famous beauty blogger Torrey Grey has everything she wants, other than her sister, Miranda.  She passed away a few months ago, and Torrey is extremely unhappy without Miranda’s little quirks filling her once happy home.

Torrey has had the worst few months. Her sister was hit by a drunk driver and died a few days later in the hospital. Her mother has become anti-social and depressed, due to her sister’s death. Now, in order to start a new life, her father is moving what’s left of Torrey’s family to Texas. All she wants is for her family to be normal again and to go back home.  Instead, Torrey has to cope with all the setbacks of being a new student at a new school, while dealing with preparations for her sister’s funeral. Torrey focuses on moving up her new school’s social hierarchy to the top level: popularity. Although, there are a few things holding Torrey back from being in the popular clique. The first is Luis Rivera, whom Torrey wants to be friends with, but the popular girls despise him. Torrey’s second barrier to popularity is the video that was posted on YouTube, of a fight between Torrey and her sister, Miranda, which ultimately led to Miranda’s being hit by the car.

Can’t Look Away by Donna Cooner was a short and enjoyable book that kept me on the edge of my seat the entire time.  Since the book was so realistic, it was easy for the reader to connect with the characters. Most novels these days conclude in a horrible, wrenching way, but Can’t Look Away ended with all the main characters’ problems resolved and a purely happy conclusion and somewhat predictable conclusion.  It was a perfect mix of realistic fiction, drama, and just a dash of romance. I would definitely recommend this book to any girl from around ages eleven through fourteen, because this book contains a few mature subjects that most children younger than eleven would not enjoy or understand. Can’t Look Away is a perfect book for anyone who just wants an intriguing and quick book to read. 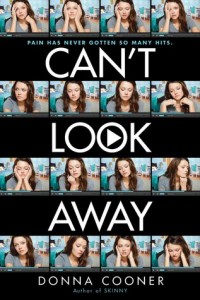