Harry Potter And The Prisoner Of Azkaban 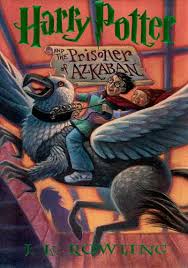 Hogwarts is a mystical place and with wondrous animals, exotic sceneries, amazing food, and crazy wizards out to kill Harry Potter…… wait what? As if real life wasn’t hard enough, try being Harry Potter, a wizard boy who is now being hunted by a wizard known as Black who is described by the characters as before becoming “evil”  “Sirius was a brave, clever, and energetic man, and such men are not usually content to sit at home in hiding while they believe others to be in danger”. Not only that, but Dementors are giving Harry Potter disturbing flashbacks to the murder of his mother. All of this and more can be found in Harry Potter and the Prisoner of Azkaban, the third installment of J.K. Rowlings book series. Harry Potter is, yet again hunted, and by another crazy wizard under the guidance of Lord Voldemort. Like the other two attempts it ends with a shocking surprise. Harry Potter, a boy who at the age of ten realized his true identity as the boy who lived,  Ron Weasley, a wizard who is poor, but is acquainted with hand-to-hand combat. As well as Hermione Granger. She’s a witch who can sometimes be a real know it all, but knows when not to be rude.

This book is the first one to feel like its Harry’s story instead of everyone sharing it, as it shows Harry’s dilemmas. In particular, he can’t step near a Dementor as every time he steps near one he gets a disturbing flashback and faints. A wizard associated with Voldemort is presumably after him, and while juggling all this, he also has to participate in Quidditch practices to win the Quidditch cup. One problem this book addressed was describing the characters in detail that should have been important, but were forgotten right after their appearance. Consequently, when this book includes characters with full names, they are brought up to be part of the plot and are not forgotten. I also enjoyed how characters like Hagrid connected to the reader, and were made to feel more relatable. Originally, he was just the person Harry could talk to, now he has even more ambitions. Reaching a crowning achievement of being a teacher, Hagrid also has sorrows. One of these sorrows is that his pet attacked someone, and is queued to be executed.

This book has a very compelling story and an ending that makes you think of how you look on the entire series. In conclusion the mystifying magic of J.K. Rowling’s Harry Potter and the Prisoner of Azkaban is a emotional and exciting story for the   reader, and the characters. As a reader, I recommend it to anyone.