In The Heart of The Sea 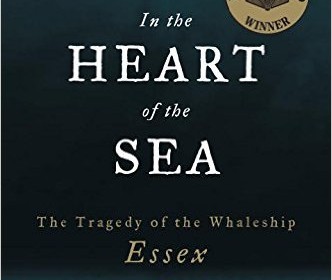 Crack. The eighty-five foot long whale slammed its head into the front of the ship, forming a gaping hole. In The Heart of The Sea, written by Nathaniel Philbrick, perfectly recounts the chilling story of the sinking of the Whaleship Essex. This true tale of death, fear, and survival is a truly exciting read.

In The Heart of The Sea is based around a 19th century whaling boat, the Whaleship Essex. The book documents the Essex’s final voyage, the sinking of the ship, and the struggles of her crew to survive. It starts off with an overview of the Nantucket oil trade, in which the Essex plays a major role. Once the real story begins, the whaleship leaves port in Nantucket on a routine whale-hunting trip. Except for a few minor storms and arguments between the crew, the beginning of the voyage is calm, and things are going well. The crew kills a few whales, turns them into oil, and are on track to fill their ship before needing to return to Nantucket. Then, the unthinkable happens.

While most of the crew were chasing after a pod of whales in the smaller whaleboats, a huge sperm whale, weighing an estimated eighty tons, crashed head-on into the ship, not once, but twice. On the second blow, the ship was crippled and sank quickly, only allowing enough time for the crew to grab some hardtack, tortoises, and water, before joining together in the whaleboats. After their main ship sank, the crew were at the mercy of the wind and the ocean. Deaths were common, and as their shipmates died the surviving crew were forced to desperate and more desperate measures in their seemingly endless battle against starvation, dehydration, and the boundless ocean.

Philbrick did a fantastic job of turning this story into a book. The sinking of the Whaleship Essex was one of the largest maritime disasters of its time, and has spawned many novels based off of the written accounts of the survivors. Books like The Jonah Man, Stove by a Whale: Owen Chase and the Essex,  and even Moby Dick retold or were based upon the story of the Essex. This version of the story, though, is by far the best read, as Philbrick conducted an excess of extra research to explain why the whale acted as it did, what starving on the open ocean is like, and how the men navigated. Not only did this make for a more complete book, but it added to the excitement and suspense of the story.

All in all, I really enjoyed reading In The Heart of The Sea. It was quick-paced enough to keep me interested, and was non-fiction, so there were historical facts to learn too. I walked away from this book with the motto that the predator-prey relationship between two groups can change very quickly. Only a few days after killing a whale, the whales were killing the men. Due to the frequent deaths and gruesomeness of the book, I would recommend this book to older readers and young adults. For younger readers, there is a junior version of the story. For a review of this adaptation, look here: http://marbleheadcharter.org/bookblog/?p=1199