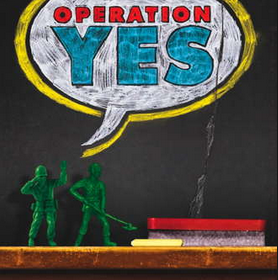 “Art needs a frame”.  “Art is arranging objects to create beauty”.  “Theater is the art of saying YES”.  These were the first three sentences that Ms.  Loupe, the new 6th grade teacher, wrote on the chalkboard after creating “The Taped Space”.  The taped space is a space on the floor surrounded by a square of tape.  It was created by Ms. Loupe and the only item in the taped space is the “ugly ugly couch”, an old dirty couch very dear to her.  When a student enters the taped space, they have to act out a scene and stay in character until they leave.  Ms. Loupe is a loopy teacher in the 6th grader’s opinions when she walks into room 208, but when the students adjust, they realize that the activities they do are things that normal 6th grade classes don’t  have the privilege to do.

Bo Whaley is a troublesome, creative, and energetic 6th grader from North Carolina, who lives with his parents, and his dog Indy by an airforce reform base.  Also, Bo really really hates school.  Gari, Bo’s cousin, has a mom who is a nurse in the army, and when her mom has to go to Iraq to assist injured soldiers during a war, Gari has no choice but to move in with her rotten cousin for a while.  Now Gari and Bo are both in Ms. Loupe’s classroom, room 208, and when Gari finds out how crazy Ms. Loupe is, and Bo actually starts to like school, Ms. Loupe goes away, and they know she may never return.  But, to bring Ms. Loupe back, Bo, his friends Trey and Melissa, and even Gari, all attempt to pull of a mission that is almost impossible!  Now they have a whole project to accomplish, but if it goes wrong, Ms. Loupe might never come back.  With this struggle at hand, Bo and his friends have to work their hardest at this impossible plan called Operation YES.

Sara Lewis Holmes created a small town in North Carolina where the young boy Bo, experiences some crazy events that lead up to an even crazier one.  Holmes created very special and custom characters with great personalities, and vivid descriptions of them as well.  She also used her imagination in many ways, such as using a couch as anything, and watching a clumsy farmer fly.  This exciting story of courage, quick thinking, and having to say goodbye to family will pull anyone in within the first page.  And after you know how Ms. Loupe’s students work in the taped space, you’ll feel like you’re in there improvising with them.  Holmes takes the normal life of a 6th grader, and turns it into a thrilling, risk-taking, and depressing realistic fiction story.  So new recruit, are you just going to sit there and read this book, or are you going to dive into the story and become part of Operation YES?