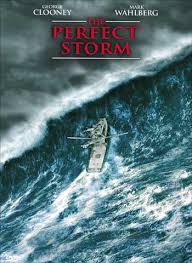 Here in Marblehead Massachusetts we cherish the sea and the benefits it gives us but in Gloucester Massachusetts the men in this story live by it and for it. The Andrea Gail is a 72 foot steel hull longliner with a 365 horsepower turbocharged diesel engine and can get going up to 12 knots, they get the name longliners because they hold lots of net to catch swordfish. The crew on the Andrea Gail for this trip to the Grand banks is Bobby Shatford, a broke kid with nothing to lose and a loving girlfriend. Bugsy Moran, a crazy guy who is very popular around town and usually spends his time at the a local bar The Crow’s Nest. Also Dale Murphy, AKA Murph, a bear of a guy from Florida with a three month old child. Finally the Andrea Gail’s captain is Billy Tyne, he is a quick thinker and a helpful man to have around.

After this crew leaves from their home town of Gloucester they are on The Andrea Gail setting course for the Grand Banks hoping for a hold full of swordfish and pockets full of cash. This story starts out slow but quickly picks up the pace when Billy gets a weather fax saying that a storm is headed their way. They are already heading back to Gloucester with what the crew estimates to be over quarter of a million dollars worth of swordfish so they try not to pay attention to the worsening weather reports. When they are about 2 days away from home  they are struck by Hurricane Sarah or what was later known to be the Halloween Storm of 1991. This Hurricane was a very rare phenomenon where three storms combined and created a force 5 hurricane which devastated the coast of New England and the American Fishing fleet.

Sebastian tells this true story by keeping you full of suspense about the what will happen next while teaching the reader about marine life. This book would be great for anyone looking for a short read but and amazing story and a book full of interesting facts. In conclusion this is an amazing true story told by an even greater author with a passion for the sea.