“Sometimes I feel like people aren’t listening to me. I spend ninety minutes up here talking about the dangers of time travel, advising you to stay the hell away from time travel, and the first question I get is ‘Do you think time travel will be available commercially?’ Then again, I spend every waking hour bent over quantum equations, so I guess I don’t listen to me, either.” With the discovery of Charles Smart’s rather dangerous wormhole, the FBI quickly utilized this invention store federal witnesses in the past, establishing the Witness Anonymous Relocation Program, or W.A.R.P.. However, when Smart learned Colonel Box, a very respected soldier, was going to use this program to manipulate regimes and governments, he took his codes needed for the Smart Hole into the past and stayed there, which was slightly useless, considering Box and his team disappeared in a mission a few days ago. Contrary to popular belief, Box did not disappear in the wormhole, but instead brought as many blueprints into the Victorian Era as possible, planning to take over the world with futuristic weapons and make it more efficient by setting up the Boxite Religion, the setting of the book. This religion was based on the story that the “Blessed Colonel” came with his “Divine Machines” to correct the sins of man. A flood ruined his catacombs, foiling his plans forever. However, when Special Agent Chevron (Chevie) Savano found Riley, a native to the Victorian Era, who was fleeing in the Victorian era to escape Riley’s assassin master, who has been mutated by the wormhole. Box noticed Chevie, and decided to rush the rebellion, creating the most efficient world possible. In this evil timeline, Chevie is now Cadet Chevron Savano, failing in the military academy due to visions of the proper world, driving her mad. After meeting Charles Smart and being shunted to the past again, Chevie must team up with Riley and notorious gang boss Otto Malarkey to create a better future.

The Hangman’s Revolution is an incredible book that immerses the reader into the Victorian Era, even narrating in third person with old vocabulary. Colfer knows exactly what to add to make the writing seem older, and also does a fabulous job in knowing how to help the reader understand the definitions of the Old English vocabulary used. The Boxite world is done flawlessly as well, showing what a truly efficient world would look like. Characters from the last book are added into this timeline, changing accordingly, like Charles Smart being a designer of missiles for Box instead of a FBI scientist. Unlike the last book, the villains are perfectly done, consisting of a true believer, a traitor, and a genius with almost no emotions. Overall, this book is a fabulous combination of modern, Victorian, and Boxite characters and settings, which I highly recommend. 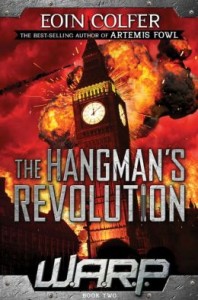